Snakes, some of them highly venomous are a feature of Australia’s native wildlife but fortunately their tendency to try and avoid human contact means their fearsome reputation is not always justified.

However, the relationship between snakes and chicken owners can be rather challenging.

On the one hand snakes help reduce the numbers of egg-stealing rats and mice but on the other are also partial to chicken eggs or young chickens (and on rare occasions adult chickens) as well.

Of course, the presence of snakes in and around your chickens can be highly dangerous for humans too, especially for young children who might inadvertently startle a snake hiding in the coop.

If you don’t know how to handle snakes you should call in an expert to have them removed. It is illegal in Australia to kill snakes, as they are protected.

There are a number of ways to protect your chickens from snakes including:

How Do I Make My Chicken Coop Snake Proof?

Snakes can slither through quite small spaces so you need to make sure your coop is covered with wire mesh with holes no larger than 10mm.

Snakes do climb and of course can go under the coop wall as well so you should ensure the roof is covered as well as the floor with adequate sized mesh.

Alternatively, you can place a mesh apron out from the edge of the coop to discourage the snakes from going under the coop wall.

Placing the coop on a solid surface such as concrete also works. You can also make the nesting box less accessible by placing it in an elevated position.

How Do I Make The Area Less Attractive For Snakes?

Like all animals, snakes are looking for food and shelter. Unfortunately, the same food you give to your chickens may also attract rodents.

They will in turn attract snakes who see your chicken eggs (and occasionally a chicken) as a bonus snack. Basically, if you have rodents you’ll get snakes too.

Minimising the chicken feed wastage and spillage with a Somerzby automatic chicken feeder will help reduce the numbers of rodents.

Rat traps and poisons are also highly effective but you need to position them carefully to avoid the accidental death of your chickens and pets or harm to young children.

Keeping a household cat will also do wonders on the rodent front but tragically will also decimate the native bird population. Cats have also been known to attack snakes.

Snakes will be attracted to the eggs so making sure that you remove all eggs as they are laid will also help make your coop less of a snake magnet.

Snakes also seek foliage and other objects such as pieces of wood and tin to hide under.

By keeping your backyard clear and pruning back the plant life around your coop you make the area less appealing for snakes.

Some people report success with electronic snake repellents. These send an electronic signal or ultrasonic vibration that is designed to repel snakes.

They may be well worth a try. 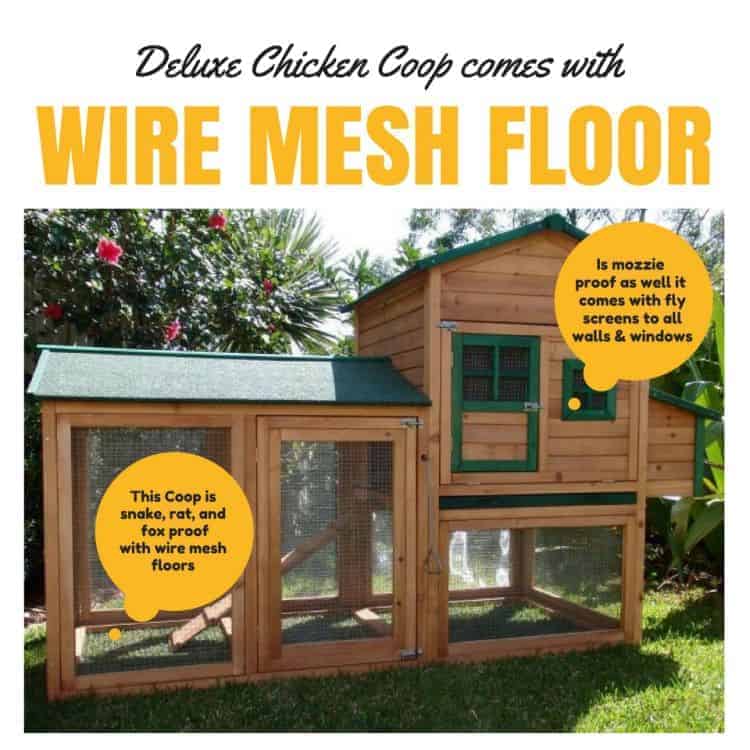 Can I Buy A Snake Proof Chicken Coop?

Yes, you can buy chicken coops that are already snake proof. the Somerzby range of coops are snake proof when installed on a level ground or hard surface.

Both the Deluxe cottage and Super Deluxe Mansion include a wire mesh floor that makes them fox proof, and both these coops feature galvanised wire chosen for its anti-corrosion longevity as well as a no snake, no nonsense toughness.