Why do cats fight with each other? Is there anything owners can do to stop their feline friends from brawling?

In this blog post, we’ll explore the reasons why cats fight and offer some tips on how to minimize altercations between your kitties. Keep reading to learn more!

Why Are My Cats Fighting?

It can be confusing and frustrating when your furry friends start to scrap. Working out the reason behind fighting is important as it is often the first step to prevent it from happening again.

Listed below are the most common reasons that cats fight:

When young, kittens will form strong relationships with their mothers and siblings. But as cats get older, they naturally become more solitary. They are not pack animals and enjoy spending most of their time alone. 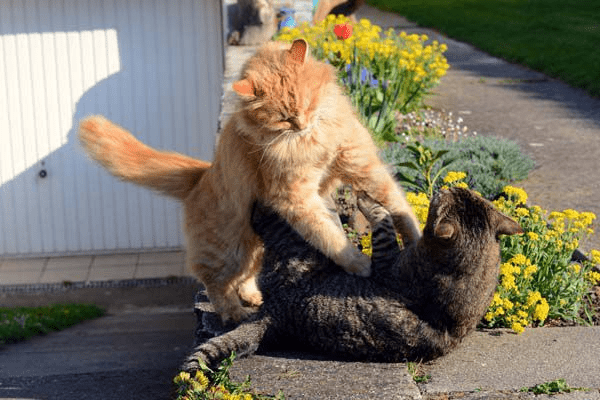 Other than their home, cats can also get territorial over their food, toys or litter boxes.

This means that cats are territorial animals. When other cats come into their space, fighting is a natural way to defend their area and make the other cat leave them alone. This is most commonly seen in outdoor cats.

Some cats are naturally more aggressive and have dominant personalities. This means they are more likely to start a fight.

This is most commonly seen in undesexed male cats and pregnant female cats as their hormones can play a role in making them more aggressive. Cats all have different personalities and they won’t get along with every other cat. Just like humans!

Sometimes cats just fight as a way of playing with each other. It may appear aggressive at first but feline play consists of wrestling and mock aggression. They may just be having fun.

If your kitty is tense, has its ears back or is causing serious injury to other felines, it probably isn’t playing.

Aggression Types That Cause Cat Fighting

There are many different types of aggression that cats can show:

Cats may display territorial aggression when another cat comes into their space. Cats will mark their territory by patrolling it, rubbing their natural cat odor onto it or peeing on it. 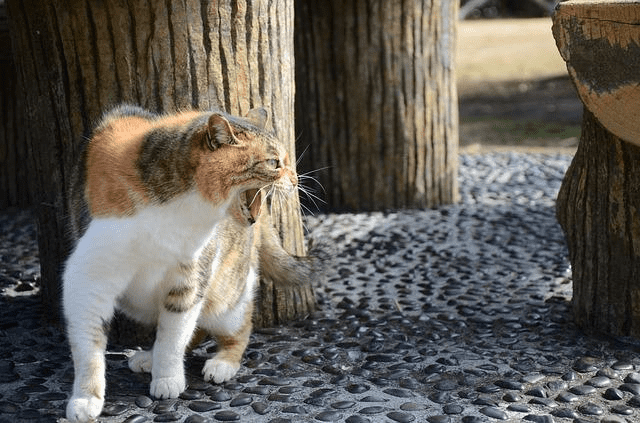 In outdoor cats, territorial aggression is most commonly seen when another cat they don’t know tries to come into their home.

In indoor cats, this type of aggression is usually seen when another pet cat within the household eats their food or takes their toy.

Some breeds, such as Siamese, are more prone to becoming territorial over a particular human and get jealous when the human gives attention to another cat.

A dominant cat may show aggression to assert its status and exert power over other cats. This may include blocking access to doorways or food, swatting them away or starting physical fights.

Some cats simply are naturally more dominant however it is most commonly seen in older, undesexed males. A male cat is usually more likely to be aggressive than a female cat.

Cats will show fear aggression when they feel threatened. Cats are often scared of the unfamiliar.

You cat could be afraid from trauma. For e.g., if a neighbour’s cat were to scratch your cat and hurt it, the next time your cat sees any neighbourhood cat it may show fear aggression as a way to protect itself from being hurt again.

New mother cats may show signs of maternal aggression if someone goes near her newborn kittens. This is her way of keeping them safe.

If your cat is in pain or has an underlying medical condition, it may get moody and start showing aggressive behaviour. If your cat has sudden aggression or unexplained, strange cat behaviour, take him to the vet for a check up. 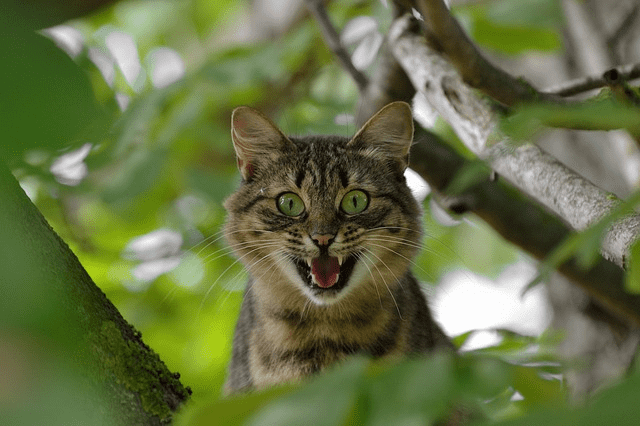 If your cat is showing strange signs of aggressive behaviour, take it to the vet

How to Stop Cats Fighting

Once you have worked out why your cats fight or are acting aggressive, you can use this reason to come up with solution.

Give Them More Space

If you have more than one cat and they are fighting with or hissing at one another, they are either becoming territorial or their personalities are clashing. The easiest solution is to give them more space so they don’t need to interact so much.

If you keep them in a cat enclosure or contained to a certain area of the house, you may need to expand it so they have more room to get away from one another.

Give them separate food bowls, water bowls and litter boxes and put each in a separate room.

When first introducing a new cat, introduce them in controlled meetings. Strange cats will often fight.

Allow them first to interact through a fence or baby gate. This way, they can see each other and take in the other’s smell without being able to fight. They will hopefully be best friends in no time! 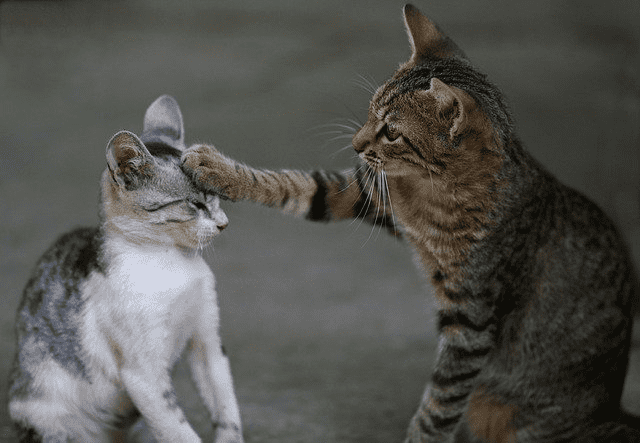 If your existing pet cats are fighting badly with one another, you may need to completely separate them for a few days to avoid conflict.

You could take one cat (ideally the more aggressive cat) to a friend or relative’s house or even pay for him to stay at a cattery. Then, gradually reintroduce them. When they react positively to one another, reward them both with treats.

If it doesn’t workout, you can try their reintroduction multiple times. Eventually, if not successful, you may have to keep them permanently separated.

If your cat is aggressive because it is afraid, add a pheromone diffuser to your home. These are proven to reduce stress levels. Add extra hiding spots to your home, allowing your kitty to hide when it is feeling threatened. An easy solution is cat trees with ‘cave’ sections.

If you have a cat living outdoors that fights with neighbourhood cats, add a cat flap so your cat can come inside to escape. You can now buy cat flaps that are microchip activated, so only your cat can use it. Keeping your cat indoors can minimise fighting.

Training may also help. If you know what your pet is scared of, you can very slowly expose him to it. When he reacts calmly, reward him with treats.

Undexed male cats and pregnant female cats are the most aggressive, due to their hormones. Getting your cats desexed will minimise aggression and help to prevent fighting.

What are the triggers to cause your cats to fight? If you take note of your cat’s behaviour and remove triggers, you can work to prevent cats from fighting.

For example, if your cat becomes aggressive when it sees a dog outside, close the blinds. If you see cats fighting over a food bowl, get multiple food bowls and put them in separate locations. He can’t guard them all at once!

If your cat becomes aggressive because it is jealous when you give attention to other cats or pets, you can train it to stop. Watch your cat’s behavior and be very aware of the first signs of obvious tension – tense body posture, hissing and dilated pupils.

As soon as your cat displays these signs, get up and exit the room. Don’t wait! Your pet will learn that aggressive behavior actually prevents it from getting any attention, not the other way around.

If you see a catfight taking place, remain calm! Resist the urge to jump in and physically separate them. This will likely lead to you being scratched and injured. 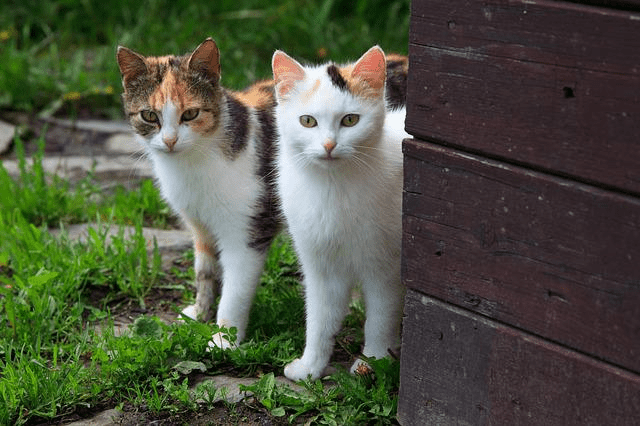 How To Stop Cat Fights

The best technique to stop cats fighting is distraction

Stand far back and make a loud noise – clap your hands, bang a pot or yell out a high pitched noise. You could even try throwing a soft object (like a pillow) near the cats.

If one feline is clearly the dominant one, redirect his attention using a laser light or another interactive toy.

Once he walks away from the fight and is calm, then reward him with a treat or pat.

What Not to Do When Cats Fight

What If Your Cats Keep Fighting

It can be frustrating when your cat continues fighting.

If none of the tips above are helping and the fighting has become an issue, we recommend contacting your local vet for a check up. It is possible pain or illness are causing your cat’s fighting.