The Homestead is back in stock and available to purchase Dismiss

The Cochin chicken makes a great family pet. Sometimes referred to as a ‘lap chicken’, they are easy to handle and happy to be held. This makes them suitable for families with children.

Cochins are most recognisable by their fluffy, feathered toes which make them look bigger than they are.

Despite not laying many eggs, Cochin chickens are growing in popularity with backyard chicken keepers. People can’t help but fall in love with their gentle personalities and big, fluffy bodies.

The Cochin chicken breed originated in Shanghai, China in 1840. They were originally called ‘Cochins-China’. They looked different to today’s Cochin and were much taller.

In 1849, Cochin chickens were brought to England by Captain Edward Belcher as a gift for Queen Victoria.

Queen Victoria was a poultry enthusiast, particularly for new, exotic breeds. Her love of chickens sparked ‘hen fever’ – a period in England’s history where it became incredibly popular to own chickens of all breeds. This greatly increased the price of chickens.

Breeders began to mix other breeds in with the Cochin to make them look more attractive. This resulted in them laying less eggs and having tougher meat.

In 1865, the Cochin was recognised by the British Poultry Standard. In 1874, they were acknowledged by the American Poultry Association.

Cochin chickens can be frizzled.

‘Frizzling’ is when a birds feathers are curled. The feather’s shaft will twist and curl upwards, away from the body. This is in comparison to standard chicken feathering which lays flat against their body.

Frizzling is caused by the incomplete dominant ‘frizzle gene’. It is believed the gene first originated by a mutation in the keratin gene.

Cochin chickens have a fluffy and feathered appearance. The legs and outer toes should be completely feathered so that they cannot be seen.

Their feathered feet make their legs look very thick and wide. The Cochin chicken has a large, heart-shaped body. 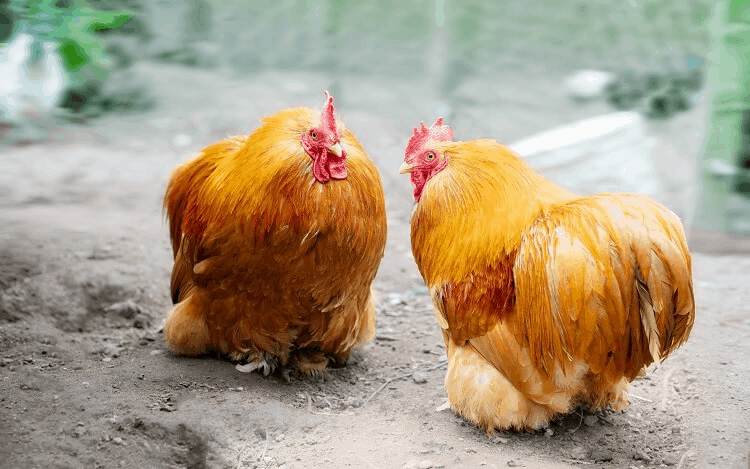 They have a single comb which is red. They also have red combs and wattles.

Their beaks will vary depending on the colour of their plumage but are usually yellow or black. Their feet, toes and skin are a dark yellow color.

They are large size birds however can take up to two years to reach their full size. Their size makes them suitable to be bred for meat.

The Cochin breeds feathering makes them look much bigger than they actually are! Cochins also hold their head high above their shoulders and have a large chest which sticks forward proudly.

When you see viral videos online of huge chicken breeds, if is often a Cochin.

Cochin feathering comes in a variety of colours including: 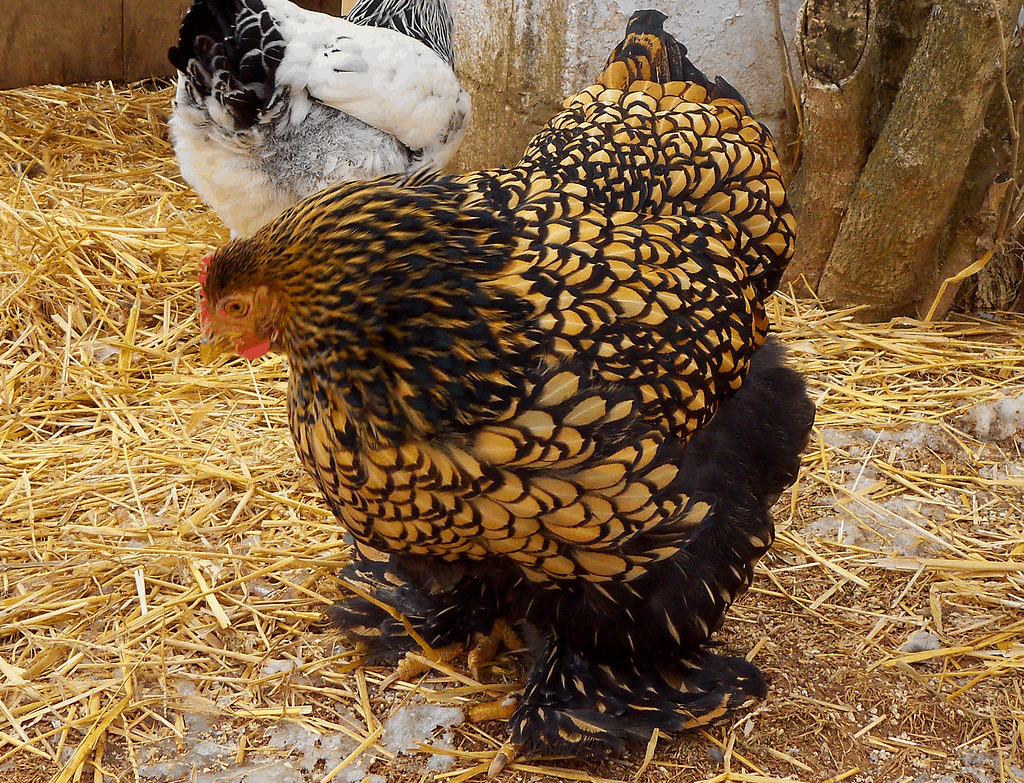 They have golden feathers with a black edging

The Cochin breed are not well known for egg laying. However, one benefit of Cochin hens is that they continue to lay through the cold winter months.

A Cochin hen lays brown eggs. They are usually medium sized. Some Cochin chicken keepers report smaller eggs whilst some report larger eggs, so it can vary.

A Cochin hen will typically lay between 180 and 200 eggs per year. That is roughly 3 eggs per week per hen.

Backyard chicken keepers love Cochins! They aren’t the best layers but they make a wonderful addition as a pet to your backyard flock.

They are also suitable to enter into shows as they are easy to handle and will tolerate new environments.

Cochins are naturally a laid back and gentle chicken breed. Even the roosters are easy going in comparison to other breeds.

Cochins are happy to be approached and handled by humans. This makes caring for them easy, and if you need to move them or check them over, you can easily pick them up. 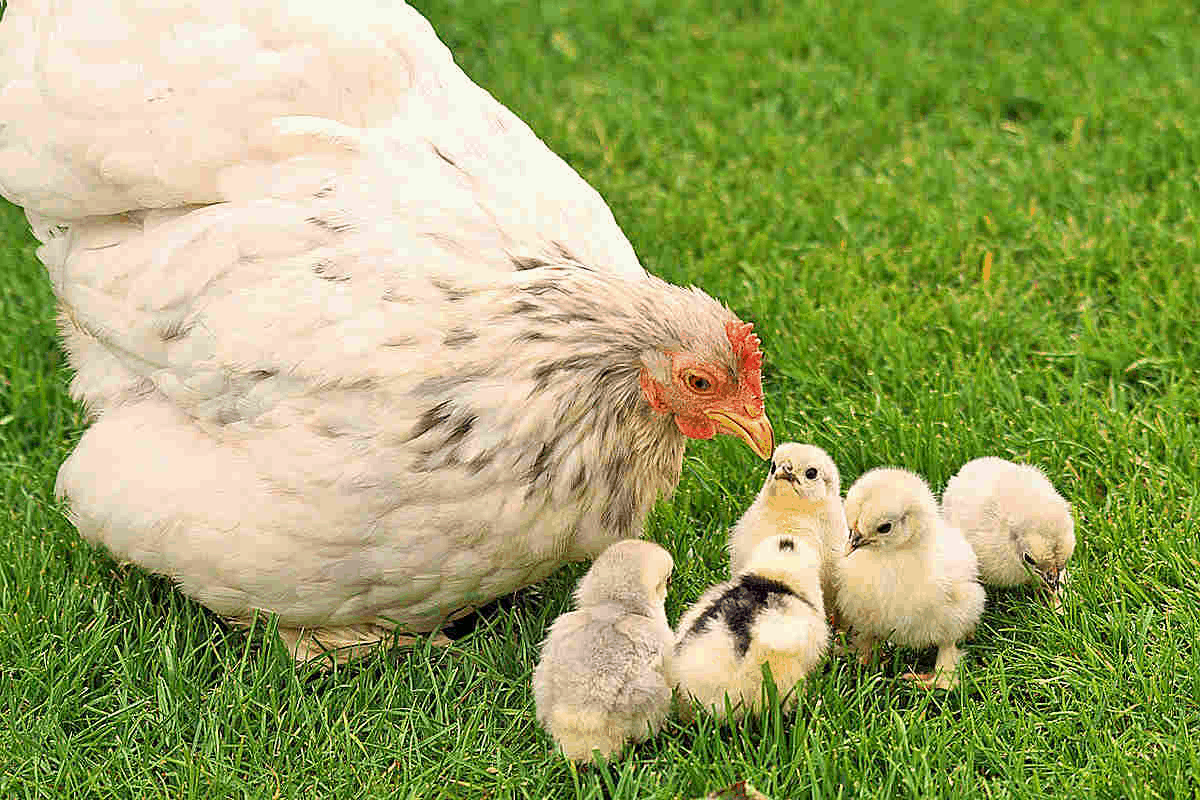 Cochin chickens are a very relaxed and chilled chicken breed

If you handle your Cochins from a young age, they may even enjoy being held and become a true ‘lap chicken’. This makes them a great pet for kids who love to cuddle them and carry them around.

Cochins are a healthy breed. They typically live for 8-10 years.

Feed your flock a high quality diet to keep them healthy. Bantam varieties will naturally eat less and are therefore cheaper to feed.

Because of their laid back temperament, they don’t forage much and are prone to obesity. Measure food and limit treats to keep your Cochins at a healthy weight.

Like most large birds, their big size means they are prone to bumblefoot if they land on sharp objects or stand on wire for long periods.

Regularly check your Cochins for mites or lice. It can be hard to spot these in between their fluffy feathers. This is when it comes in handy if your Cochins like to be picked up and handled.

If you ever have any health concerns for your Cochins, contact a vet who specialises in poultry or birds.

Cochins can handle confinement but are happiest when they are allowed to free range. A good chicken keeper will provide their Cochin flock with a high quality chicken coop.

This gives them a safe place to perch at night and somewhere to head back to during the day if they feel frightened.

Most backyard chicken owners keep them safely locked into their coop at nighttime then let them out into a larger run or yard area to free range during the day.

Make sure this daytime area is safe from predators including foxes and snakes. Cochins are not very fast and therefore an easy target.

Cochins are not good flyers. This means they can be contained with lower fences.

If a large bird jumps down from a high perch, they can injure their legs. Most Somerzby coops come with low perches which makes them ideal for your pet Cochins. 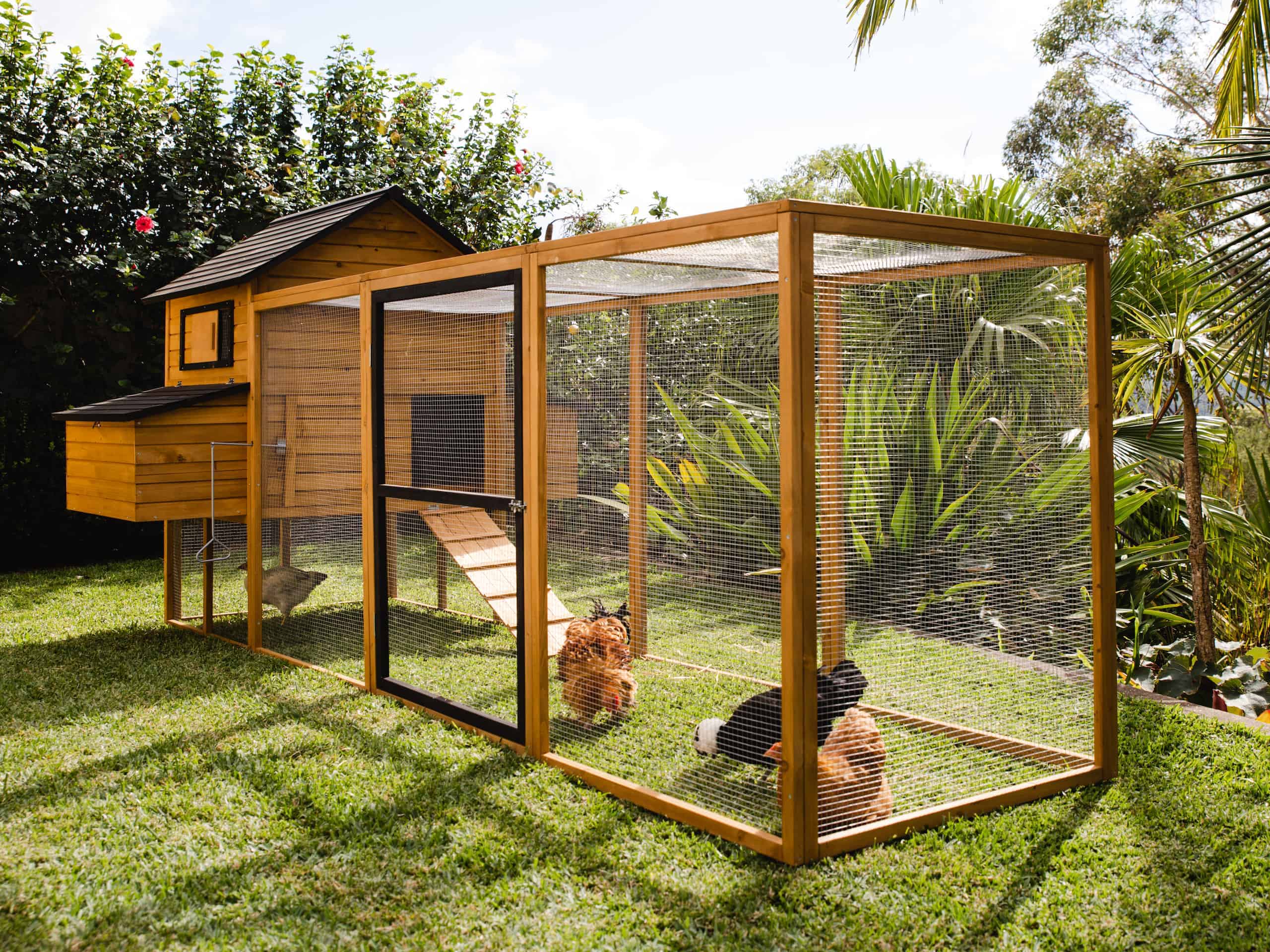 The stylish, free standing cabana is a luxurious place for your chickens to live. It features an elegant charcoal trim and warm colors that will make you feel at home with their laid back vibe!

Somerzby coops also come with nesting boxes mounted onto the side of the coop with an opening lid.

This makes collecting eggs super easy! You can easily lift the lid and get the eggs without having to get inside of the coop.

If you are after a hen that will sit on and hatch fertile eggs, a Cochin is the right breed of chicken for you!

Cochin hens go very broody. They will often happily raise abandoned birds that aren’t their own.

If you aren’t looking to hatch eggs, a broody hen can be a nuisance. They will sit in the nesting space all day and can get defensive if you approach them.

If a hen is showing signs of broodiness, you should temporarily block her from being able to get into the nesting area.

Most chicken keepers only keep hens. They provide you with a fresh supply of eggs. They are also more gentle and friendly, making them a more pleasant bird.

Males can be trickier to handle, especially for those new to owning chickens. Roosters are more aggressive, crow loudly and can sometimes grow sharp spurs on their feet.

In comparison to other chicken breeds, standard sized Cochin roosters are quite easy going. They are more friendly that you’d expect.

However, Cochin bantam roosters can be far more aggressive and prone to fighting.

When buying baby chicks, most people only want hens as pets and do not want to acquire roosters, especially those who live in suburban areas.

Before they are fully grown, females and males can be difficult to distinguish.

Some experts are able to sex newborn chicks from one day old. A technique known as ‘vent sexing’ may be used to determine the gender chicks. 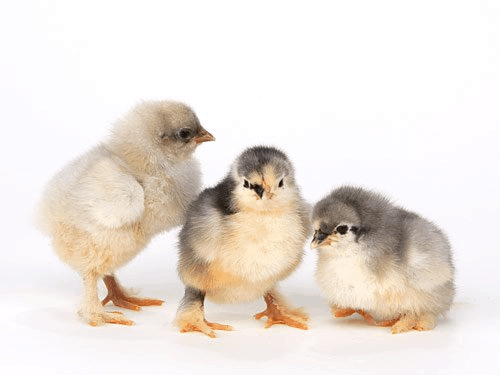 Cochin chicks are adorable and fluffy

This may inflict damage on your chick if done incorrectly, therefore leave it to the pros.

This is not always accurate or reliable so there is a chance you may still end up with some males!

As they get a little older, the first signs your bird is a rooster include them having a more upright tail, a larger comb or trying to crow.

Cochin chickens are available in Australia. They can be acquired from professional or backyard chicken breeders.

Prices may vary based on seasonal availability, demand, location or which colour you choose. There is usually an extra charge if you require the poultry to be delivered to you.

The average price of point of lay Cochin hens is $30. This indicates that they are 5 or 6 months old, and they are about to begin laying.

There is very little demand for roosters. They are usually sold very cheap and sometimes given away for free.

Baby Cochin chicks are sold for around $15 each. This is a cheaper option and they are very cute!

Baby chicks require more effort to care for. They will need to be kept under a constant heat source for around 6 weeks.

This time may be extended during the colder months. After that, they can be let outside.

Be careful mixing them into a flock containing adult chickens. They usually won’t get along with bigger birds and are prone to being bullied and injured.

The cheapest way to buy Cochins is to purchase fertile eggs from breeders. They sometimes sell them as cheap as $24 per dozen.

Hatching can be hard work. You will need an incubator or good broody hen to hatch them. There is also a risk that not all of them will hatch.