The Australorp (aka. the black Australorp or Australian black orpington) is one of the most popular backyard chicken breeds in Australia. And for good reason!

Chicken keepers agree that Australorps are a good dual purpose bird – they have high egg production and are suitable to farm for their meat.

They also make great family pets. They are friendly, easy to handle and cold hardy.

The Australorp is an Australian heritage breed and is considered our honorary national bird.

They were first developed in the early 1900s by cross breeding the orpington chicken with the white leghorn, langshan and Rhode Island red.

The black Australorp was the first colour created, getting their colour from the black orpingtons.

The name ‘Australorp’ is an abbreviation for ‘Australian orpington’. Some people still refer to the breed as the Australian black orpington or the black Australorp.

Although they are now very popular as backyard pets, The Livestock Conservancy considers them a ‘recovering’ breed as they are still low in numbers compared to other breeds.

Similar to Plymouth Rocks and Rhode Island reds, Australorps are prized for being a good dual purpose bird.

This means they are suitable to farm both for egg production (as they lay a high number of eggs) and for meat (as they have a heavy build). 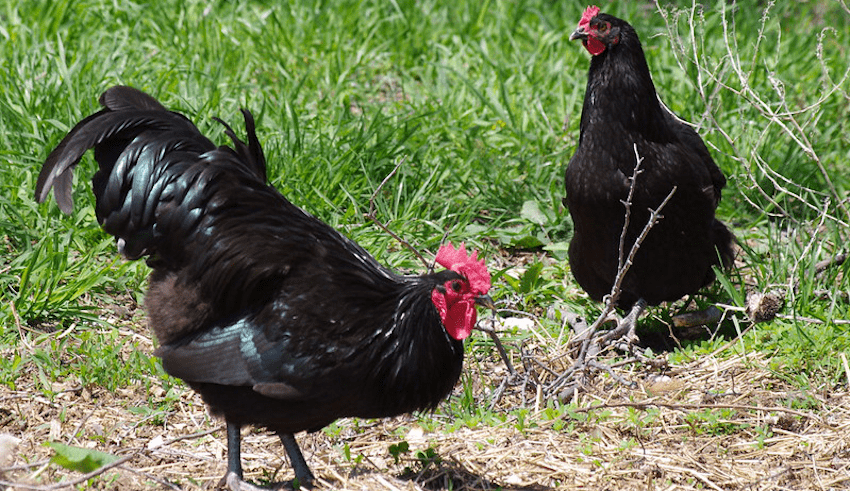 The three main colours for Australoprs are black, white and blue

Black Australorps are a beautiful chicken. They have slate blue or black legs and beak.

Their comb and wattle are a stunning red. Roosters have a taller comb that is even brighter in colour than a hen’s.

They have a round, solid body with a full breast. The rooster’s head is higher than the tallest point of its tail.

Australorp chickens come in both standard and bantam sizes.

A standard sized Australorp weighs between 3 and 4kg. They are considered to be a tall chicken breed.

A bantam sized Australorp weighs between 0.7 and 1.2kg.

Roosters are typically bigger and heavier than hens.

The Australorp has beautiful, soft feathers. They come in three recognised colours – black, white and blue:

The American Poultry Association only recognises black Australorps, as they were the original colour they were bred in. 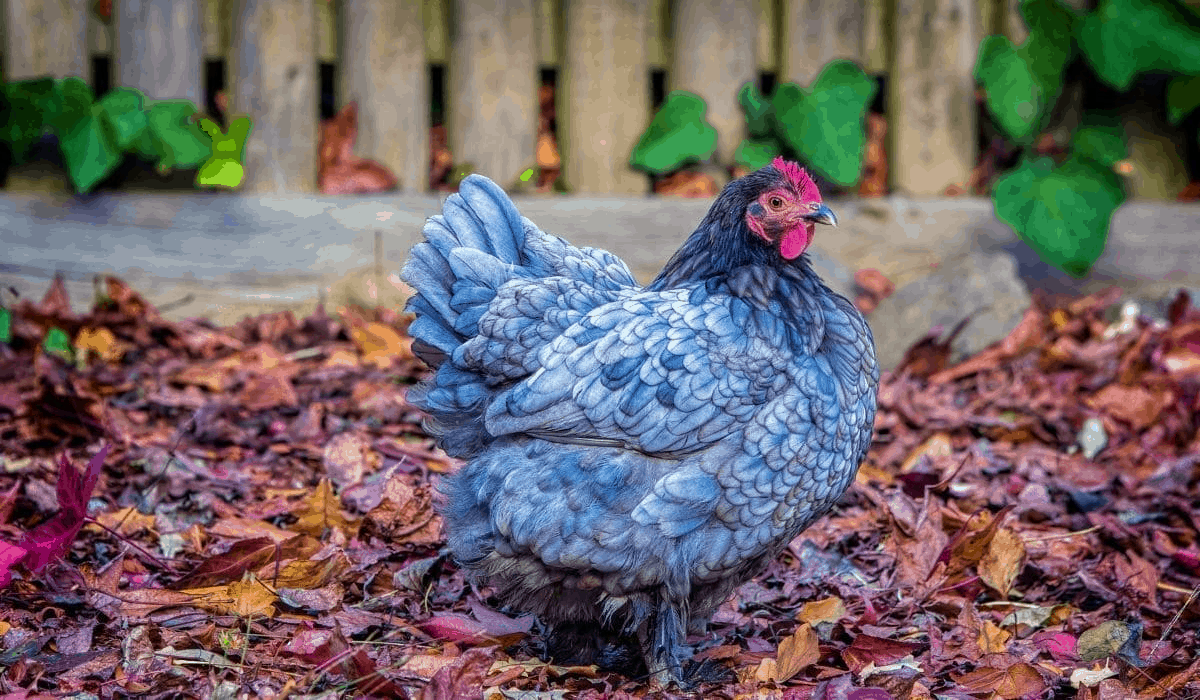 Blue Australorps are the second most common colour

They broke the world record for most eggs laid when six Australorp hens each laid an average of 309 eggs in 365 days.

Their extraordinary egg laying ability is a big reason they are such a popular choice for backyard chicken owners. Their egg production is impressive.

An Australorp’s egg production usually begins when it is between 22 and 24 weeks old.

The average Australorp hen in a backyard setting will lay between 250 and 300 delicious eggs per year.

It is not realistic to expect your one chicken to lay 309 eggs in 365 days (like the world record) but they sure come close!

When they are around 4 years old, their egg production will begin to decrease. Some may stop laying completely in older age. Their life expectancy is around 8 years.

Like all hens, they will stop laying when they are moulting. This is usually for 6 to 12 weeks every autumn. During this time, chickens are using all their nutrients to replenish their feathers and are unable to also produce eggs.

During winter, Australorp chickens will lay less eggs and sometimes stop laying completely until it warms back up again. 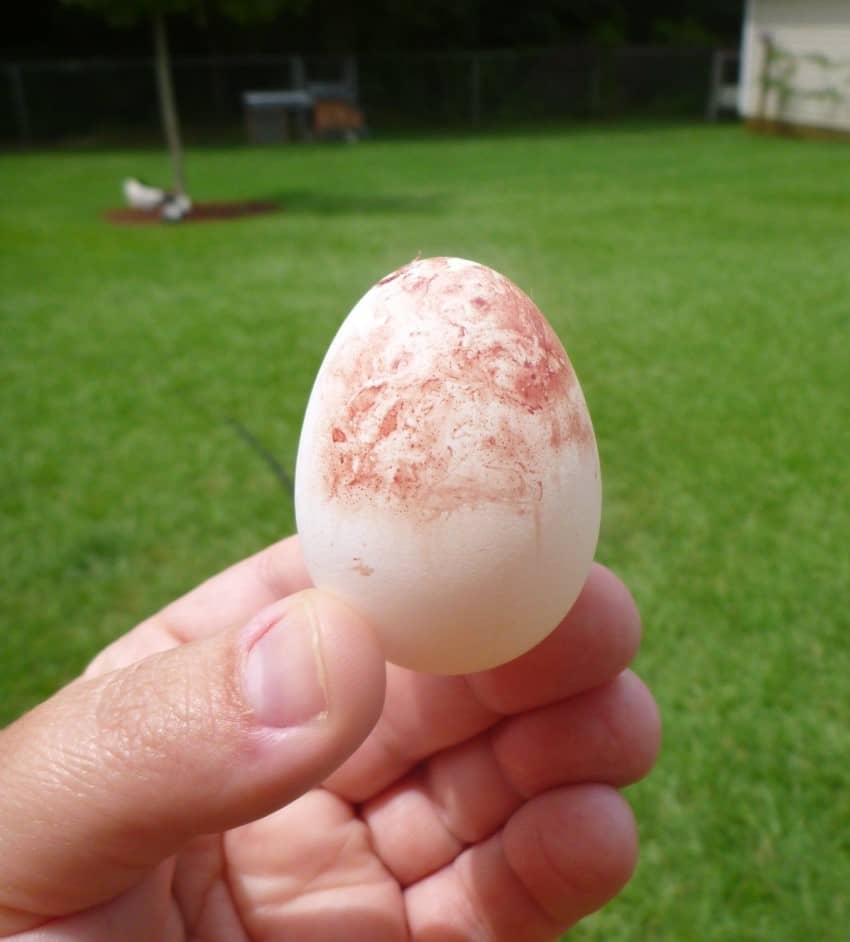 Sometimes they can appear to have a very slight pink colouring but they are really light brown. This pink tinge is just because of the natural coating hens produce when the egg is laid.

The colour of an egg is determined by the breed of chicken, not by the colour of their feathers. It is a common belief that a black Australorp will lay a black egg. But that is incorrect!

When choosing the right chickens for your backyard flock, consider how each breed’s characteristics best suit your needs.

Australorp chickens make a great addition to either an urban or acreage backyard.

If you are searching for a breed that has good egg laying abilities and makes a great pet, look no further than an Australorp!

The Australorp is a very docile breed. They are easy to approach and handle.

They are a sweet bird that doesn’t mind interacting with humans, other chickens and other pets (as long as they have been socialised together from an early age).

This makes them simple to care for and a great chicken for beginners or families with children.

The Australorp is a hardy breed and handles cold weather quite well.

They are quiet birds that don’t make as much noise as other breeds.

Caring for your Australorp

The Australorp is a relatively low maintenance chicken.

You will need to give them fresh food and water daily. We recommend using an automatic treadle feeder to protect food from being spilled or eaten by wild birds.

You will need to clean out the coop and nesting boxes every week and replace all bedding.

If you let your chickens out to roam during the day, make sure that they are all tucked up safe and sound in their coop each night and that the door is securely latched to prevent predators gaining access.

Keep an eye on your flock to make sure they are healthy and happy. If you suspect one of your girls may be unwell, take them to a vet to be checked properly.

You should worm them regularly and vaccinate them if there are known illnesses in your area. 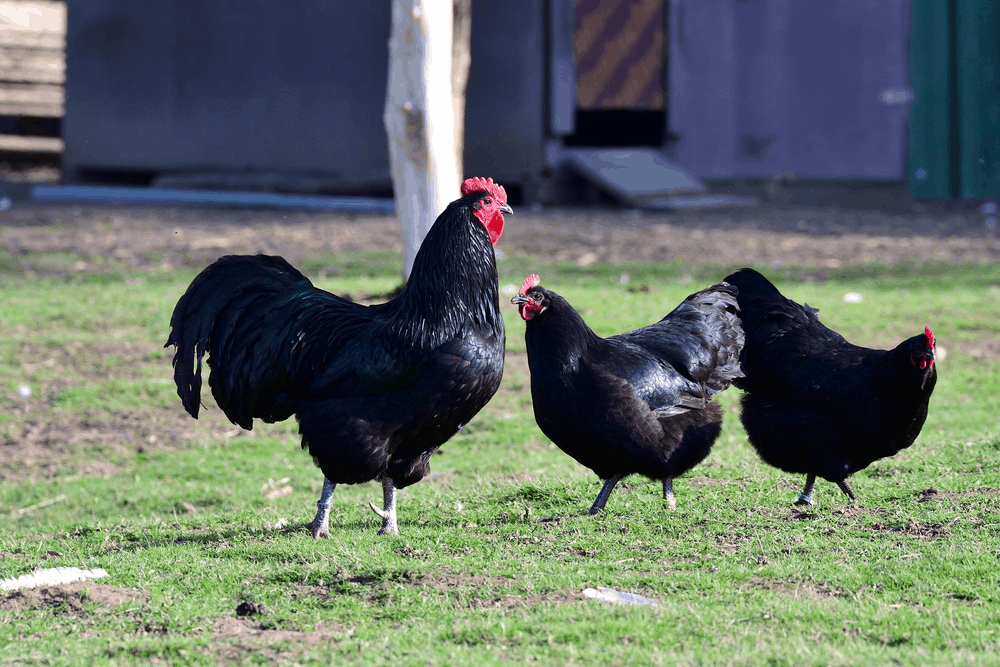 Black Australorps a have glossy, black feathers with a beetle green sheen

The Australorp will go broody occassionally, but not more than the average hen. Remove eggs from their coop daily to prevent broody behaviour in this breed.

Australorp owners report that their mothering abilities can vary greatly from bird to bird. Some will make good nest sitters if you are looking to hatch fertile eggs. Others aren’t interested at all.

Most Australorp backyard chicken owners only keep hens. Not just because of their obvious egg laying ability but also because they are easier to care for.

Australorp hens are generally much friendlier, easier to approach and happier to be handled.

One Australorp hen will get lonely so most owners will keep a few together.

Australorp roosters can be more difficult to keep. They can be aggressive and territorial.

An Australorp rooster may crow loudly in the mornings and grow sharp spurs on their feet.

For these reasons, many local councils either don’t allow backyard owners to keep Australorp roosters or they have strict regulations in place for ownership.

Choose your backyard chickens a high quality coop made from rot resistant timber and with a waterproof asphalt roof.

The size you need will depend on how many chickens you have. Make sure there is enough room on the perches inside so they all have somewhere to roost at night time.

Look for a coop with large opening doors and a slide out metal tray. This will make cleaning out the coop much easier.

The Somerzby Estate shown below is our new design chook house. It’s the ultimate luxury accommodation for your chooks.

It has a large 133cm high door. It’s super easy to access and clean with a large metal pull-out tray. 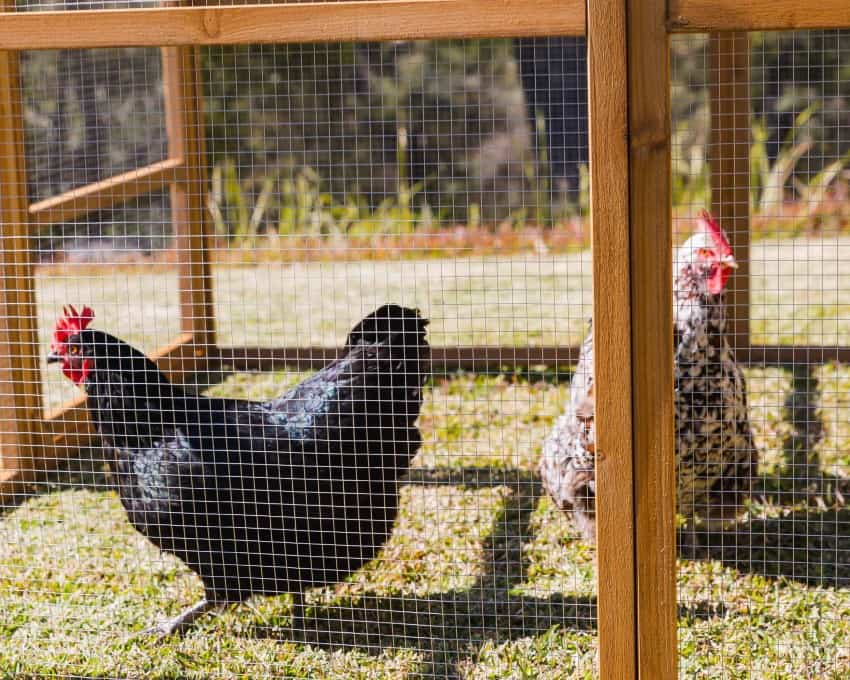 Get the right size coop

The Australorp will tolerate confinement but loves to free range and wants room to stretch its wings!

You can choose a coop with a small run area and then let them out into a larger yard space every day to free range and scratch around on the grass.

Alternatively, you can choose a coop with a really large run area that gives them enough room to stay inside while being kept safe from predators.

The Australorp is a large bird and therefore flies poorly. This makes containing them in your yard much easier as a standard sized fence should keep them in without their wings being clipped.

Australorp chickens will naturally be drawn to laying their eggs inside a nesting box as it helps them feel protected and secure.

Nesting boxes benefit chicken keepers as you don’t have to spend time searching your whole yard looking for eggs. They also decrease the chance of eggs being broken or stepped on.

Choose a chicken coop with nesting boxes built onto the side with an opening lid. This will make collecting eggs a breeze!

Australorps can be purchased from a professional or backyard breeder. Some breeders are able to transport them to you for an additional cost.

An Australorp chicken can also be purchased from a local farm supply or feed store.

A point of lay Australorp is at the age where it is about to start laying, aka. around 5 months old. They will cost between $15-40 each.

Prices can vary greatly based on demand and availability.

Day old baby chicks will usually cost between $10-15 each. They are very cute but there is a risk you may end up with some roosters.

You will need a heating source to keep them warm at 33 degrees. You will also need to keep them separate from adult chickens as they may try to harm the chicks.

Fertile Australorp eggs are much cheaper and cost around $12-24 per dozen.

Hatching eggs can be exciting and a great way to teach children about where chickens come from.

However, it is a lot more work and isn’t guaranteed that all of them will hatch. You will need to have a good broody hen or an incubator to hatch them.

Australorp is Hands Down, the BEST Chicken breed in Australia!