Guinea fowl might be a strange-looking bird but they’re becoming increasingly popular in Australian backyards and lifestyle blocks.

Many people love their Guinea fowl because the birds are just so loveable and full of personality.

But Guinea fowl aren’t for everyone and you need to think about how well they’ll fit your situation.

To answer your questions about these marvellous birds we’ve put together the ultimate guide to keeping Guinea fowl.

Guinea fowl are a hit with gardeners thanks to their voracious appetite for demolishing bugs and pest insects in the garden.

But Guinea fowl are also popular because their loud warning cries serve as a perfect alarm system against predators such as snakes or foxes and they will also let you know when people come to your property.

Guinea fowl are native to the West Coast of Africa but the distinctive polka dot plumage, bald helmeted heads, and their bottomless bug munching appetites are earning the birds some real fans in Australia too.

They’ll demolish all the garden pests for you but because they are generally surface feeders they tend not to scratch or uproot established garden plants (be wary about letting them loose amongst your young veggie seedlings though).

Guinea fowl are generally too independent to make cuddly pets but their personalities and antics are highly entertaining and many people love them for their quirks. 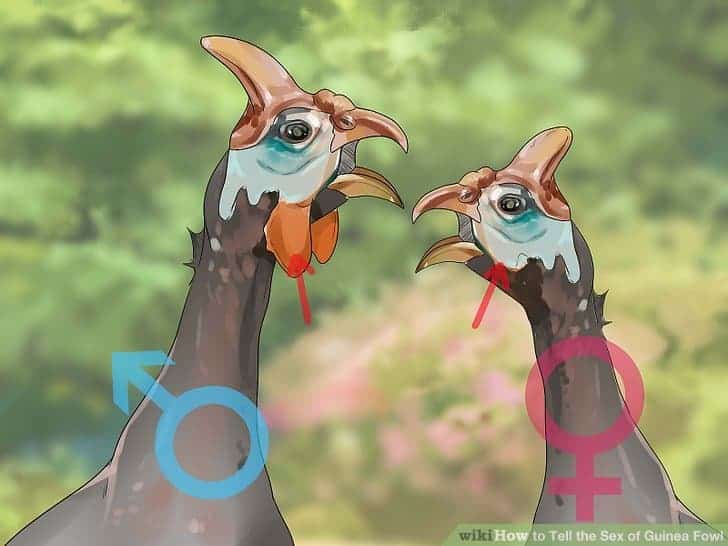 The Difference Between Male and Female

It can be difficult to tell males and females apart because their adult plumage is identical.

The male’s helmet and wattles tend to be larger than the females but the easiest way to distinguish them is by their calls.

Guinea fowl noise is loud and they do like to make nuisance noise for no apparent reason.

This could be an issue with neighbours especially at night.

The males make a one-syllable chi-chi kind of sound whereas the females produce a distinctive two-syllable call.

There are several varieties of Guinea fowl but the most common are; lavender, pearl, and white.

Guinea fowl will grow to weigh 1 kg or more and their flesh is very tasty, somewhat similar to pheasant.

Guinea meat is richer tasting than chicken meat with the added bonus of having less fat and fewer calories.

Most Australian councils class Guinea fowl under the same regulations as chickens.

Generally you can keep up to a maximum of 15 Guinea fowl in most NSW urban council jurisdictions.

Rules vary from State to State so for example, in Logan, Queensland, you can keep up to 6 without a permit on a 1,000m2 section.

Guinea fowl are highly sociable birds and you should aim to keep at least four to six birds.

There are also strict rules relating to placing coops and runs at minimum distances from neighbour’s boundaries.

You need to check with your local council before you add Guinea fowl to your family. 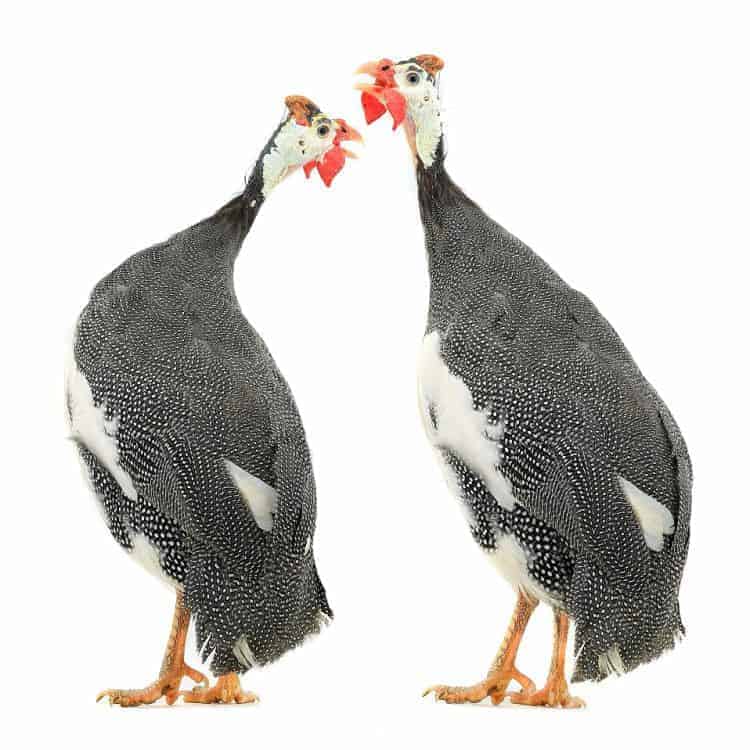 All About Guinea Fowl

What are the pros and cons of keeping Guinea fowl?

You could say that Guinea fowl have a real presence and if you live in a rural area with plenty of free ranging space that may not be a problem.

But if you live with close neighbours you might want to think carefully about how your Guinea fowl will fit in.

Guinea fowl have some wonderful qualities but check out our pros and cons list to see if they’re the right bird for you.

– They are the pest insect and bug blasters supreme.

They will march as team through your garden like a well-oiled killing machine in a relentless hunt for caterpillars, ants, ticks, slugs, and even mice and sometimes rats and snakes.

They can eliminate the need for toxic garden sprays almost entirely and they’re generally much easier on your plants than chickens.

– They are an excellent alarm system and will loudly warn you of any intruding predators, animals or people.

They will even attack some predators such as rats and snakes.

They’re tough and will survive in a wide range of climates.

They don’t need so much feeding either, provided you have a large enough area for them to roam and get their daily bug boost.

Their crazy antics, the fiercely protective love between a cock and his hen, and the constant chattering communication throughout the flock have won many converts. 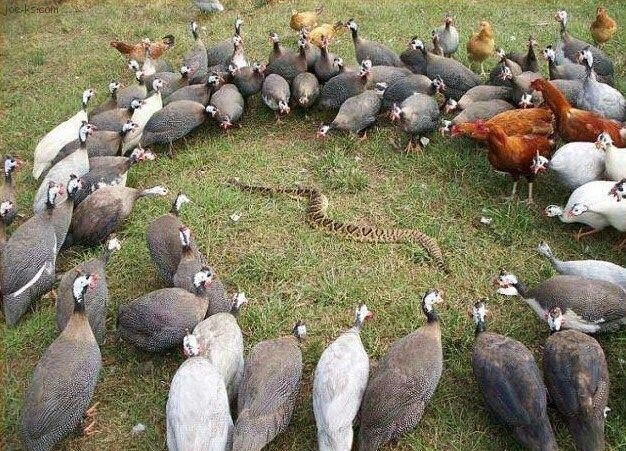 And the will create a real din for no apparent reason.

This could be an issue with neighbours.

Yes, they will warn you if a snake comes onto the property but they will also let you know that it’s sunny, raining, or that it’s just seen its own reflection in a puddle.

They have no respect for boundaries, roads, cars, council regulations or really anything else.

They may roost in your neighbour’s trees, terrorise their cat or scratch their shiny new car.

– They can be aggressive

But not so much towards people, but they will often bully your chickens and beat up the rooster (if you have one).

They don’t make cuddly pets although they will become more sociable and friendly if they’ve been raised with chickens and other animals or handled from very young.

They think nothing (quite literally) of taking on cars or trucks and will fight their own reflections to the death.

But then many people actually find this personality quirk extremely endearing.

Here are some commonly asked questions that will help you decide if Guinea fowl are suitable for your needs and situation.

There is plenty of evidence to suggest that they will surround, harass, deter, and even kill small snakes, but it’s unlikely that they will eat the snake.

Guinea fowl are great snake deterrent and do a great job of keeping the snake away, and the at the very least they will warn you that snakes are around.

Do Guinea Fowl Need a Coop?

… but it is best to keep your Guinea fowl in a coop.

Will guinea fowl fly away and will they come back?

Yes, they do fly and will often fly up into trees or rooftops to roost.

You can clip their wings, and this will restrict their flying.

But it’s important to train them from young to think of the coop as home. This ensures that they will return when they do go wandering.

When releasing young Guinea fowl from the coop for the first time, do it one at a time.

Their strong flock mentality will ensure that the loose ones will stay close to the coop.

Eventually they will all learn that the coop is home.

Will Guinea Fowl Get Along With Chickens?

But be aware that Guinea fowl will rule the roost and may bully your chickens although this behaviour is usually much less severe if the Guinea fowl have been raised with chickens.

Providing separate coops and runs can offer a good solution too. 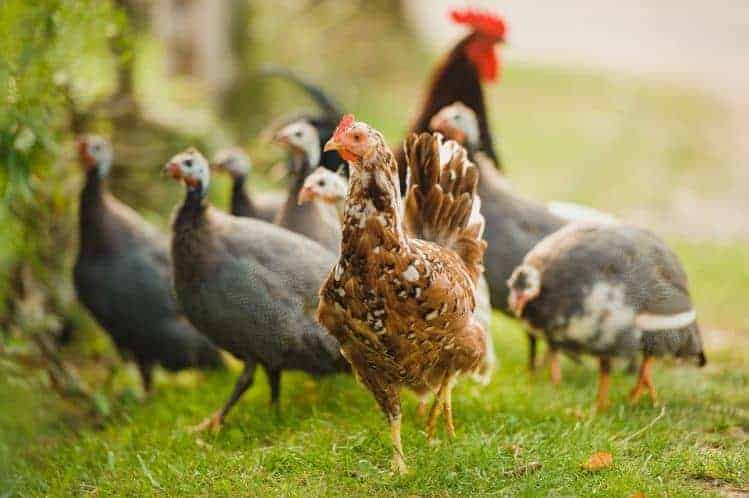 Guinea fowl will chase and eat many predators that would otherwise harm your chickens including snakes, mice and rats, and their fearsome din will often scare off larger predators too.

Guinea fowl and chickens will occasionally cross breed but the resulting offspring will be sterile.

Yes, you can feed them the same kinds of food as you do your chickens but if your Guinea fowl are ranging freely you won’t need to give them so much.

Guinea fowl love munching on all the creepy crawlies in your garden and they’ll get rid of the pests with minimal damage to the greenery. 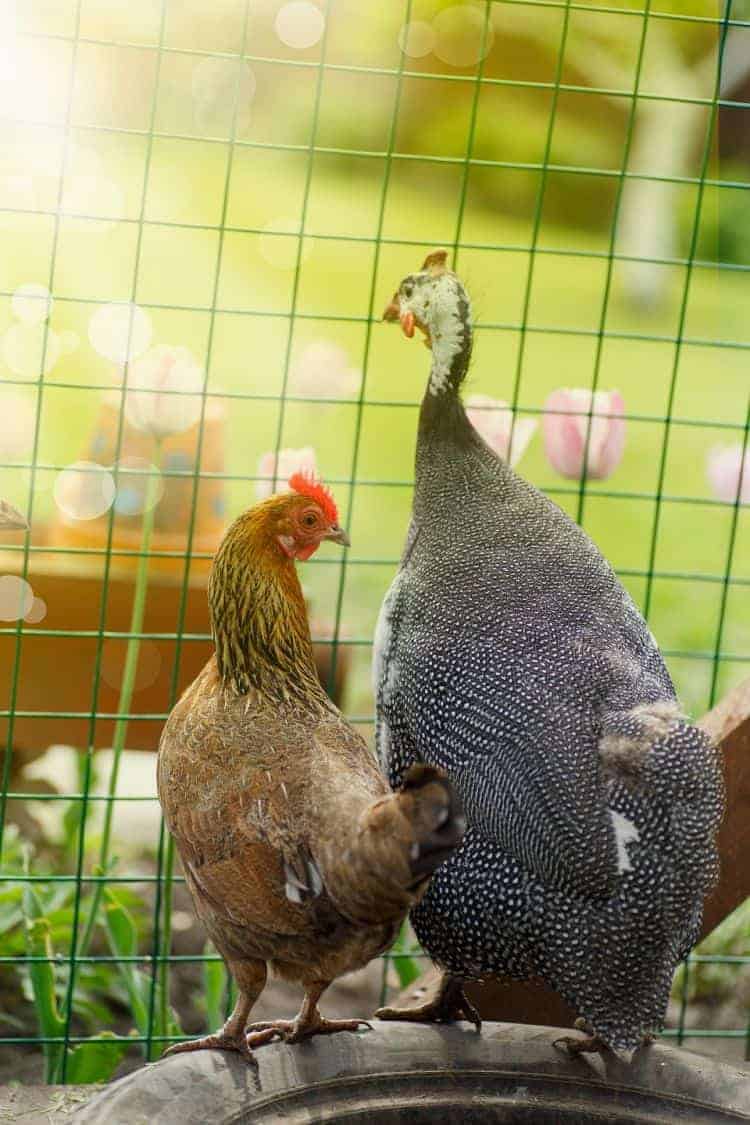 Will guinea fowl lay eggs and sit on their eggs?

Yes, Guinea fowl lay eggs in-season. It’s usually once a year and a hen will lay around 100 eggs.

The eggs are smaller than chicken eggs but the shells are much tougher.

The eggs contain more a higher proportion of yolk to white and are very tasty.

Try to encourage Guinea fowl to lay their eggs inside the coop.

If they are allowed to lay them outside you will have a hard time finding them because they conceal the nests in the most cunning ways.

Guinea fowl are not renowned for being great mothers and will not necessarily sit on the eggs until they all hatch.

The eggs will take around 26 to 28 days to hatch and you can use a broody hen or incubator if the mother is not really interested.

The young keets (youngsters) are very feisty and agile so you’ll need to keep them in an escape proof pen.

Make sure they have a non-slip surface to run around on because their legs are still quite fragile.

Yes, Guinea fowl are extremely hardy and will cope with the whole range of Australian climates.

In fact, they seem to cope with the winter cold, rain, frosts and snow better than many chicken varieties.